For the Win - As Forever (Official Audio)

FOR THE WIN DEBUT FIRST NEW TRACK IN TWO YEARS, “AS FOREVER” 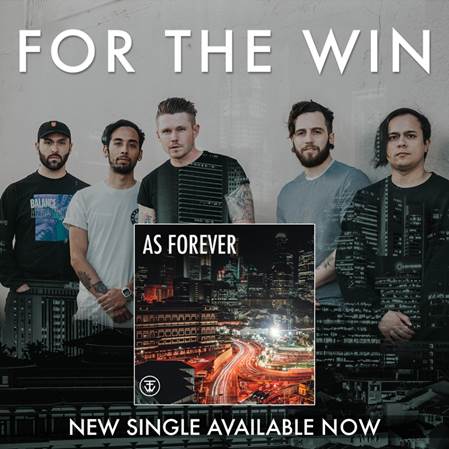 FOR THE WIN is swinging back with “As Forever,” the first taste of new music from the San Diego outfit since their 2017 release Heavy Thoughts. “We are thrilled to get this new song out to our fans, and to thank them for their constant words of encouragement over the years,” exclaims FOR THE WIN’s vocalist Kyle Christensen. Known for their addictive heaviness, powerful pop and fist-in-the-air singalongs, “As Forever” anchors an emotion that every person can relate to.

Listen To “As Forever” Now.

“There is an interesting side to how this song came about,” admits Christensen. “It started as an unfinished demo back in 2016, just as we finished recording our album Heavy Thoughts. Even through that record was done, the writing did not stop. The first half of ‘As Forever’ lyrically shows how I was feeling and where I was in life - struggling with certain situations and battling to understand why some things played out the way they did. Since I started piecing that song together, I spent the last three years doing a lot of self-discovering so this song reads with the first half showing who I was in 2016.” Fast forward to present day, the charismatic frontman adds, “After revisiting ‘As Forever’ in 2019, it made sense that this song could pick up where FOR THE WIN left off in 2016. When you push through the hard times and come out on the other side wiser and stronger, those moments shape who you are.”