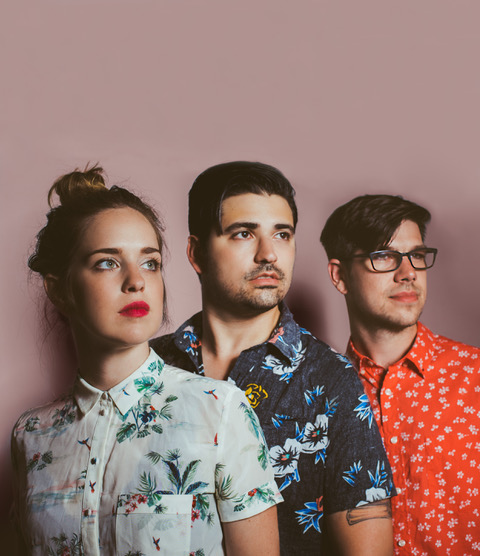 Check out the new visuals from The Astronots. Entitled ‘Wandering Eyes’ the single narrates the true story of a couple who despite their fairytale wedding, were living a complete lie. Sonically the single features 60's soaked melodies, soaring harmonies and an infectious toe-tapping rhythm.

The Astronots palpable garage sound has lent itself to placements on film and TV, as well as acclaimed curated playlists and blogs.

The Astronots are an American rock’n’roll outfit, spearheaded by its founding members, Niko Giaimo (Vocals/Guitar) and Allee Futterer (Vocals/Bass). The two are established musicians in their own right. Futterer has had years of cutting her musical teeth, backing some of the biggest names in the Los Angeles music scene, while Giaimo was an integral member of the scoring team behind productions such as Dexter and Dishonored II. The two come together on The Astronots, combining elements of their quintessential Los Angeles upbringing, classic rock, and west-coast cool. Now completed by guitarist Eddie Campbell, the group continues to wow audiences across the nation.

Inspired by the likes of Led Zeppelin, Alabama Shakes and Kings of Leon, the trio have crafted an EP oozing with gritty guitars, explosive percussion and raw energy. The highly anticipated Cotati is brought to life through its organic instrumentation and authentic lyricism. “We really wanted to capture something honest. The songs cover a variety of issues.. school/public mass shootings, anxiety, drinking, love, pain, passion, cheating.. I think we managed to create individual genuine stories in each song. I think the theme would be honest perspective on many of life’s challenges”, they reveal.

Leading single 'Wandering Eye' is a quirky love song. Based on a true story about a couple the duo grew up with. Giaimo reveals, "They had an insanely beautiful Cinderella wedding, but not long after that the wife started cheating, and the husband was secretly gay and going out with his friends in women's clothes. They were both cheating on each other in different ways, and somehow, everyone knew about the cheating except for the couple themselves!!! They ended up splitting up and are now both happily married in new relationships!". Sonically the single features 60's soaked melodies, soaring harmonies and an infectious toe-tapping rhythm.

The Astronots palpable garage sound has lent itself to placements on film and TV, as well as curated playlists and blogs. The Astronots song, ‘Black Milk’ from their 2017 E.P Strange Terrain was featured on the CBS hit television show Life in Pieces. While their song ‘Begging for More’ was placed in Andrew Garfield’s 2018 feature film, Under The Silver Lake.